No way to sell the product, I know – but with a bit of luck by now I’ve weeded out the squeamish and the faint of heart and surfers who’ve stumbled upon this site while looking for the sexy bits from Spartacus: Blood and Sand. If you’re still there, it’s time to make my pitch. 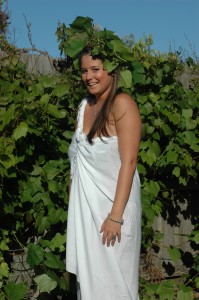 Roman food is fun. It has its own style and a palette of flavours that is different and distinctive and when you get it right delicious. Something old becomes something new. For all the difficulties I have enumerated, with judicious reading, frequent tasting and a generous pinch of commonsense, it is possible to make meals that are like nothing you have ever tasted – combinations of sweet and sour that defy categorisation, flavoured with an extraordinary suite of herbs and condiments such as rue and asafoetida, defrutum and garum. It’s the frame that makes the picture: by confining oneself to a limited range of often unfamiliar ingredients, learning to use them while staying within the constraints of a two thousand year old recipe, then discovering to one’s surprise that the result tastes really good, one gets an eerie sense of sharing a sensory experience someone long dead valued and went to a lot of trouble to pass on.

If, as I freely concede, it is hard to make Roman cuisine work as the sole culinary style offered by a modern restaurant, it can still be a great basis for a memorable and unusual gastronomic event. There’s a group called Ars Convivialis* in Rome who organise this kind of thing, with couches and 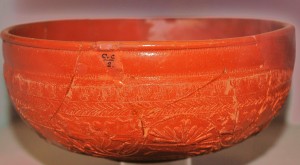 togas and repro Samian tableware and – it’s possible my imagination may be running away with me – slave-girls who won’t serve you unless you speak to them in Latin. Wonderful on a summer’s night in the ancient vineyard

recreated amidst the ruins of Pompeii. But Australia? I have my doubts. Toga parties can be fun, I seem to remember, but for me the trouble with serious attempts at historical re-enactment is the kind of people who go in for them. Middle-aged Messalinas and dorks clomping around as centurions. When they’re not earnest and anoraky, they’re just plain embarrassing. I can’t shake the image of coach trips to medieval banquets where annoying jesters and hefty wenches compel everybody to sing wassail songs and throw chicken-bones over their shoulders. My position therefore is: Forget the stage set and concentrate on the quality of the food and drink. Particularly the drink, which from a winemaking point of view has been a revelation.