De Re Coquinaria, Apicius’ cookbook, was written for the privileged Roman upper class who took an ample and varied supply of food for granted and had the leisure and resources to indulge their appetite for fine dining. Ordinary people in the Ancient World lived close to subsistence level, eating mainly porridge and pulses, bread, vegetables, limited amounts of meat and cheese and only the worst kinds of wine. (I am reminded of a panel in Larry Gonick’s Cartoon History of the Universe: two slaves are eating porridge and onions. One says ‘I’m sick of porridge and onions.’ The other looks up, puzzled: ‘You’re sick of food?’). Urban plebians had a somewhat higher standard of living than slaves and farm labourers, working men in particular taking most of their meals in the ubiquitous Thermopolia. 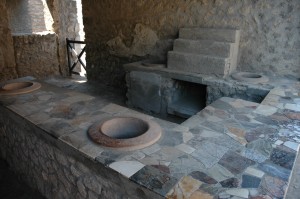 These were a sort of cross between a pub and a fast food joint – the ‘Greasy Spoons’ (Unctae Popinae) of Horace – places where you could enjoy tasty items like sausages and various kinds of pizza, and (if the poet is to be believed) the inn-keeper’s daughter. 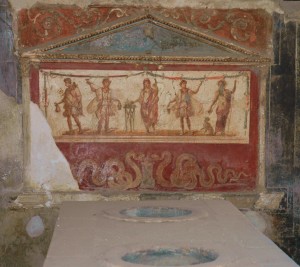 But our interest here is that of the serious antiquarian gastronomist, focusing specifically on the Roman Dinner Party. Even among the wealthy elite, breakfast (Ientaculum) and lunch (Prandium) tended to be simple meals; the Cena anything but. There were three courses, Gustatio (Appetisers), Prima Mensa (First Table, the main course) and Secunda Mensa (Dessert). Guests were expected to dress for dinner. Not togas though – the formal woollen Toga was hot and uncomfortable – men preferred to wear a tunic and a Synthesis, an elegant version of the dressing gown, and women the Stola, a tailored evening gown. Wine would be served and there would often be some form of entertainment – anything from poetry and uplifting tracts to acrobats and gladiators. Not every night was an orgy. In many great houses the evening meal was a joyless affair presided over by a grave pater familias who, if he adhered to the old Roman ways, believed women should not be allowed wine because it upsets their constitution and ‘promotes thigh-spreading’. But for every Cato there was a Petronius Arbiter. Striving for the greatest elevation of the human spirit,

cultured epicures and rich vulgarians agreed that sumptuous dinners with delicious and unusual food and wine could only be improved by music and dancing girls and all manner of other entertainments. 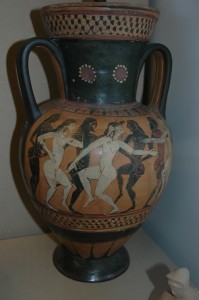 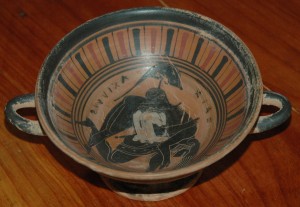 As the power of Rome grew, the austerity of the early Republic gave way to Imperial decadence. The recently-conquered Greeks were to blame for this. As soon as they’d stamped out uncongenial and effeminate ideas like democracy and freedom of the individual, the Roman elite decided Greek was chic and set about filling their houses with (looted) Greek art and literature, talking to one another in Greek*, and copying the Greek tradition of the Symposium. But where the Greeks placed a high value on witty conversation and self-restraint, the arriviste Romans too often gave way to vulgarity and conspicuous consumption. Our principal source, you will not be surprised to learn, is a serious offender in this regard, as his recipe for wild boar crowned with sausages made from its own entrails and stuffed with goat stuffed with pheasant stuffed with dormice, and his porcine foie gras (made by force-feeding dried figs to pigs then killing them with an overdoes of mulsum)**, and his penchant for elaborate gastronomic jokes (mock anchovy, fake fowl, Trojan Pig filled with 30 foot sausages made to resemble its large and small bowels) make plain. 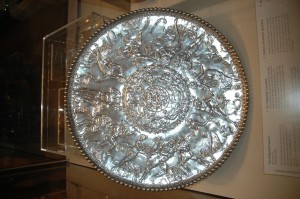 * Julius Caesar’s last words were ‘Kai su teknon?’ (You too, my son?), not ‘Et tu Brute?’** Pliny VIII 51 (209) There is also a method of treating the liver of sows as of geese, a discovery of Marcus Apicius – they are stuffed with dried fig and when full killed directly after having been given a drink of mulsum.