Vegetables - pulses including fava beans, chickpeas, peas, lupins and lentils (though girls take heed: ‘No lady should eat these provokers of malignant wind’).

- root vegetables including turnips, parsnips, beets, radishes, and something purple or white that may have been ancestral to the carrot.

- salad greens including lettuce, endive, rocket, chard, cress, nettles, vine leaves, elder, mallow, fenugreek leaves, sorrel, and field greens. These could be eaten raw or as a puree with vinegar and seasoning.

Cereals (wheat, barley, rye, oats) made up a large part of the ancient diet. Porridge (puls) of various kinds was the mainstay until Imperial times, when the development of commercial bakeries made bread available to the general public and Greek recipes for sweet buns, tarts, cakes and a wide range of elaborate pasties such as baklava achieved wide popularity. 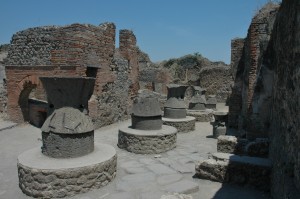 Meat – pork (eaten head-to-tail, udders, wombs and ears being particularly prized), mutton and goat were the main varieties of red meat. All were expensive: one pound of pork, venison or fish cost 12 denarii, which was half a labourer’s daily wage in 301 AD. Beef was rarely eaten (except in Britain and the northern provinces in the later Empire) and only then when animals were too old to work. Dormice (specially fattened in little clay pots called gliraria which prevented the animals from moving around) were raised on an industrial scale.

- game – venison, boar, bear, rabbits and hares – was welcome when available and no kind of offal was wasted. Foetal rabbits (laurices) were esteemed a delicacy. 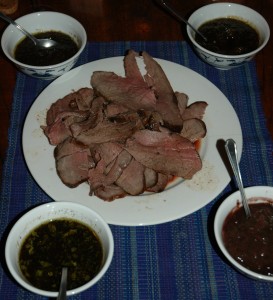 - poultry such as ducks and geese (chicken was also available, but it was expensive). Then as now, force-feeding to produce pate de foie gras was practised with both ducks and geese. Domesticated peacocks, swans and pigeons were a luxury, as were exotics like flamingo and ostrich, but wild birds of all sorts were widely eaten including small songbirds such as thrushes.

- eggs were collected from domestic poultry

- a wide variety of hams and processed meats. Sausages (farcimen) were made extensively, using pork, beef, blood (botulus) and many kinds of offal especially brains.

Fish was expensive and much sought-after. The rich had their own fishponds, and fishmongers kept their catch fresh in tanks of constantly flowing water fed by aqueducts, such as those on the fifth floor of the Emperor Trajan’s massive shopping complex at Ostia.

- every kind of fish and crustacean was eaten, particular favourites being the mullus (red mullet, whose red scales, it was said by Apicius, were displayed to best advantage if the fish was brought to the table alive and dispatched by immersion in garum), tuna, mackerel, lamprey and eel. 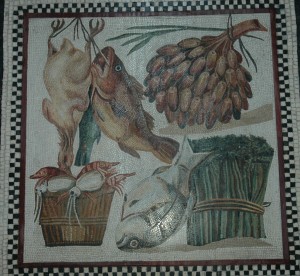 Dairy: a very large variety of hard and soft cheeses made from sheep and goat’s milk was enjoyed by all classes. The use of butter and cream was regarded as a quaint Gallic aberration by Roman cooks to whom olive oil was the norm.