Books and dishes have this common fate; there was never any one that pleased all palates. So, though I deliver up these papers, I invite no man to the reading of them: and whosoever reads and repents it is his own fault. As I made this composition principally for myself, so it agrees exceedingly well with my constitution; and yet, if any man has a mind to take part with me he has free leave and welcome. But let him carry this consideration along with him: he’s a very unmannerly guest that presses upon another body’s table and then quarrels with his dinner. 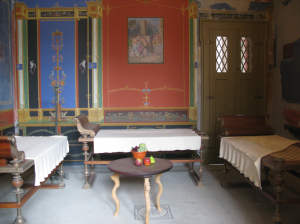 There has been an explosion of interest in exotic food and drink in recent decades: it is hard to think of any readily definable cuisine for which cheap, lavishly-illustrated mass-market cookbooks are not freely available. So what remains to explore? Classic Eskimo Seafood? Easy Ugandan-Style Barbeques? Authentic Amazon Rainforest Cooking at Home?

Actually, there is one unusual, distinctive and surprisingly tasty cuisine that has yet to attract public notice. It was not only histories and epic poems and philosophical dialogues that were written in the ancient world; there were cookbooks too. Largely lost, unfortunately, but several hundred recipes have come down to us, together with a collection of to-modern-taste somewhat startling things to do with wine. So, Epicure, wearied with the commonplaces of fine dining where even the delights of the most expensive restaurants soon grow stale, where can you go to sample this new and fascinating cuisine? 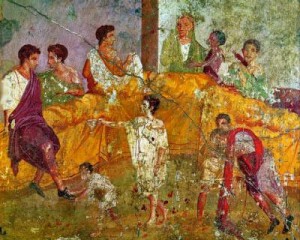 At present, nowhere. Absolutely nowhere. And I don’t just mean Australia. There are not, as far as I am aware, any restaurants devoted to Ancient Roman food anywhere in the world, not even Rome. One or two places* have some Roman-inspired dishes on the menu, and for the last ten years there has been an interesting restaurant in Athens** making heroic attempts at Ancient Greek food – it would be tactless here to repeat Professor Kitto’s observation that dinner in ancient Athens consisted of two courses, the first a kind of porridge and the second a kind of porridge – but so far the pattern for the half dozen restaurants that have attempted to recreate the food of the Emperors has been closure within a year.