Roman food was not bland. Nor does the English tourist’s perennial complaint about iffy foreign food – ‘They have to season it so heavily because it’s probably off’ – have any validity here: grain and pulses kept well without the need for refrigeration, all other foods were eaten fresh in season. Roman cuisine stands on its own merit, its uniqueness deriving in large part from the unfamiliar repertoire of herbs, spices and condiments it employs.

Garum and Liquamen (I treat these terms as synonymous) is said to have originated in Greece some time around the Fifth Century BC. Detailed instructions for its manufacture have survived: the process, essentially similar to the making of Thai Fish Sauce, involved mixing by-catch and the guts and blood and waste parts of fish such as mackerel, tuna and moray eels with salt and allowing them to ‘ferment’ in closed containers left in the heat of the sun. This process smelt so bad it was forbidden by law to make garum within the limits of any city in the Roman Empire. Over a period of three months, enzymatic decomposition yields a thin salty liquid which, quite remarkably, does not taste all that fishy, but acts like MSG as a flavour enhancer with a delightful ‘umami’ quality to it. Different grades of garum, made in subtly different ways and from different types of fish, gave the Roman gourmet access to a range of styles and flavours we can only guess at. While I applaud the intrepid food explorers who make their own garum*, I find judicious selection from the existing south-east Asian varieties reasonably satisfactory, with the proviso that the funkier, fishier types (I might mention Colatura di alici) work better with robust, savoury dishes, whereas lighter, paler, sweeter sauces are required for desserts and custards. 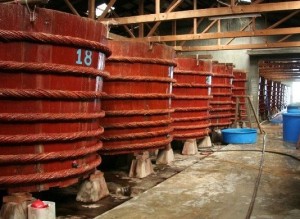 The dried matter that remained after the all the juices had drained out was not wasted. Called alec, or fish-pickle, it was used as we might use balachan or perhaps Bombay duck. On no particular evidence I have substituted dried salted anchovies crushed with a pestle and mortar in the few recipes that call for alec.

Combinations of Garum with Mulsum (Oenogarum), vinegar (Oxygarum) and honey (Meligarum) were used as sauces, as was Oxymel, a sweet-and-sour mixture of vinegar and honey.

Silphium. This is a sad story. Silphium was an umbelliferous plant like a sort of giant fennel. Its resin, known as laser, was unutterably delicious and commanded a price above rubies. In the Treasury of the Roman republic in the Temple of Capitoline Jove there were three rooms, one for gold, one for silver and one for Silphium. The plant however grew in only one locality on the North African coast and resisted domestication. The climate was drying out, the immensely valuable Silphium was overcropped, and a fatal fashion developed for the meat of animals pastured on the plant. The last stand was eaten by a herd of goats in the time of the Emperor Nero. The Romans substituted Asafoetida for the lost spice – imagine saffron had become extinct and in its place all we had was turmeric – but the flavour was never the same. 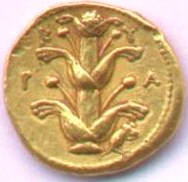 In my opinion, the contrast between the heavenly Silphium and Asafoetida (also known as Devil’s Dung) must have been considerably greater than ancient and modern writers suggest. The first time I tried to cook with the stuff I was so disgusted by its decomposing cabbage/septic tank smell I threw out the dish (Minutal Matianum – a kind of pork and apple stew) untasted. Maybe it’s just me: not everyone I have since exposed to uncooked Asafoetida feels quite as strongly about it as I do – some people actually seem to quite like disgusting smells – but for me ‘foetida’ constitutes a serious understatement. Whenever a recipe called for Asafoetida I simply failed to remember to add it, and so it continued until an Indian friend explained that cooking, specifically frying in ghee or oil, transformed the putrid stench into an agreeable garlicky-onion aroma. And that’s exactly how it is: so if you plan to use Asafoetida, take a tip from me and FRY IT FIRST. 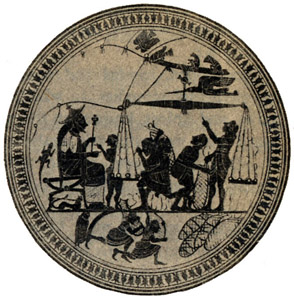 Exotic Herbs used in Roman cookery include rue (bitter but surprisingly OK in small quantities), wormwood (its poisonous, addictive and hallucinogenic properties have been exaggerated), lovage (like celery leaf), pennyroyal (like peppermint), savory, borage, costmary, bay berries, myrtle berries, catmint, lavender, citron (the only citrus known in the ancient world), hyssop, mallow flowers, mastic, pyrethrum (feverfew), sweet violet, spikenard (Nardostachys jatamansi – which I have never used but which can perhaps be obtained from aromatherapy suppliers), hazelwort (apparently has a peppery taste and emetic properties. I haven’t got round to that either).