This menu is intended to give an idea of what you might serve at a Roman Dinner Party. The selection of dishes arises from fifteen years of experimentation and reflects my personal preferences. For details of specific recipes, it is best to go to the original texts, most of which are available in English, and play around with them yourself. A quicker and easier course, however, is to visit one of the Websites which feature Ancient Roman Recipes, although purists may cavil about loose translation and some suggested substitutions (anchovy sauce for garum, date syrup for defrutum, tripe for sow’s uterus, squeamishness about brains … I could go on).

GUSTATIO: Gustatio or Promulsis was basically a selection of hors d’oeuvres or antipasto or tapas. As in a modern restaurant, some dishes can serve equally well as starters or mains. Choose from: 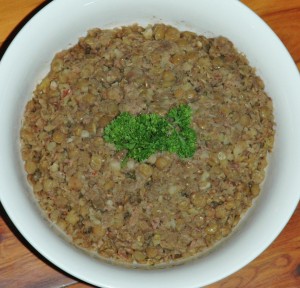 - Olives (a selection of deli Greek and Italian olives is satisfactory) 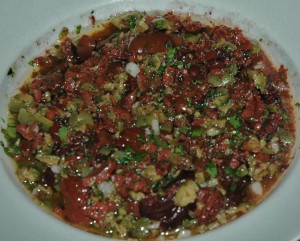 - Hard Cheese such as Pecorino

- Smoked Fish such as Mackerel 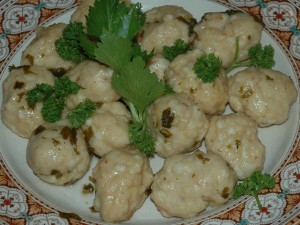 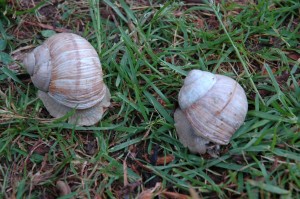 For that finishing touch I would love to add Stuffed Roast Dormice – Apicius VIII ix – but investigations so far suggest dormice are not available in Australia.

‘Dinner Delayers’ like the above were commonly served with a chilled Mulsum Aperitif. Chilling white wine was achieved both by packing small wine-jars in ice and straining wine through a sieve containing crushed ice. The ice was transported in large chunks down mountains in winter, then packed in straw and buried in pits until it was needed in summer: in consequence cold wine was something of a luxury.

MENSA PRIMA; the Caput Cenae or Head of the Dinner. In the absence of rice and potatoes and pasta, I find the easiest way to achieve a balance between meat or fish, vegetables and bread is to serve a variety of dishes simultaneously and let guests help themselves to whatever they like.

- Stuffed Sow’s Matrix (Apicius II iii 1) with Apician sauce (Apicius VII i 2). A dish esteemed by Emperors, the idea of eating wombs is repellent to modern tastes, and the serving of offal designated unfit for human consumption would probably attract prosecution in Australia. If this isn’t enough to put you off, best get uteruses from your neighbourhood abattoir rather than harvesting them in the authentic Roman fashion (Pliny: VIII li (209) sows are spayed in the same way as also camels are, by being hung up by the forelegs after two days without food and having the matrix cut out; this makes them fatten quicker). 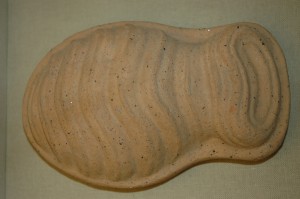 - Boiled Goose Apicius VI viii with Nine Times Sauce (a bread sauce recipe from Ausonius, Epigrams XIX xx. Just the thing if you fancy you’re Catullus and are looking for something to set you up for ‘novem continuas fututiones.’) 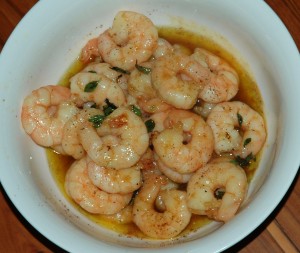 - Minced Crayfish tail balls (this is a magnificent, not to mention cripplingly expensive, dish. The principal reason for its inclusion here, however, is that it gives me the chance to quote Barbara Flower and Elizabeth Rosenbaum’s mischievous mistranslation of Apicius’s instructions to the cook, ‘Folium noci uvam prius demes,’ which they would have us believe means ‘Remove first the harmful scrotum.’ Apicius IX i 4 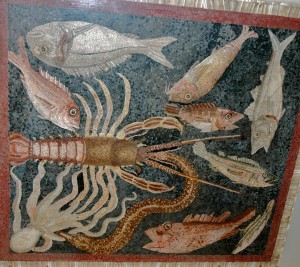 Vegetable Dishes: this, in my opinion, is where the biggest hole appears in Roman cuisine. The best way to cope with the lack of potatoes, pasta, rice and tomatoes is to make sure there’s plenty of nice crusty bread and lavish maximum effort on a wide selection of small, tasty side-dishes.

- Green Beans boiled then tossed in salt and olive oil

- Cucumbers braised in oil and oxymel 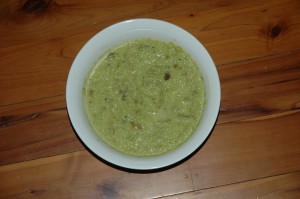 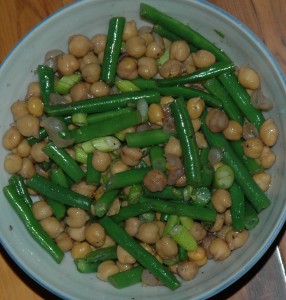 - Chickpeas and Cheese Galen On the Power in Foods, in Grant, 2nd edn p142

- Mushrooms in honey, oil and garum (this is a great dish, very reminiscent of Chinese Honey-Glazed Mushrooms) Apicius VII xiii 6

MENSA SECUNDA: a selection of nuts, fruits and cakes basically. A chance to rest on your laurels after the exertion of the first two courses. Successful desserts include: 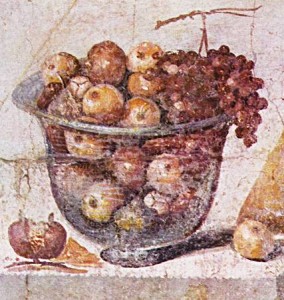 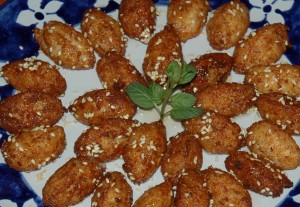