My first attempt to translate this yielded: “By wine is elevated man’s strength, his blood and his manly marrow.” That was a mistake. For colos I had read colus, a rod or distaff. Colos, it turns out, is actually an unusual archaic Latin form of the noun Color, which means colour, hue, complexion. I should have written: “By wine are improved man’s strength, blood and complexion.” Pity, but there it is.

To the Romans it was self-evident that wine was one of the necessities of daily life. They held there was a strong association between wine and the other pleasures, and only a fool or a philosopher would deny himself any of them. ‘Life is uncertain,’ they said, ‘They serve no wine in Hades.’

But what were Roman wines really like? Circumstantial evidence suggests the best of them could well have been pretty impressive. The prices they commanded – a day’s wages for half a litre of one of the Italian first growths, and vastly more for well-regarded vintages – indicate either seriously good wine or an extremely gullible clientele. Good Roman vintages were not uncommonly cellared for 25 years – or a hundred in the case of the famous Opimian vintage of 121 BC. Wine was stored in unglazed earthenware amphorae made waterproof internally with pitch – by which is meant not some toxic petrochemical but gently heated pine resin, ideally from Bruttium (modern Calabria). A thick layer of olive oil was poured on top of the wine, and the amphora (which was stored upright but drained, in due course, through a hole bored near the base) was then tightly sealed with various combinations of resin, cork, fired or unfired clay, plugs of fibrous vegetable matter, plaster and Pozzuoli cement. However the seal was achieved, the wine would appear to have aged very slowly, well protected from oxidation. 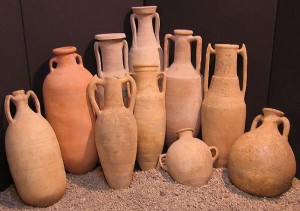 There is a detailed body of Roman literature on the subjects of viticulture and winemaking. Apart from a few idiocies from Cato the Elder, a poisonous old aristo whose De Agri Cultura includes calculations on the economics of working a slave to death, and injunctions to grow vines as high as possible (so they’re closer to the sun) and to ensure the necks of amphorae are left full of air – hard to imagine his winemaker rushing to correct him on any of this – most of the techniques described in these sources make extremely good sense. From which it may be concluded the Romans knew how to make extremely good wine.

But that is not to say they always succeeded. There are lots of recipes for ‘improving’ wine with resin and seawater and a huge range of other adulterants. And while it is true that additions of sea-salt, provided they are kept below one gram per litre, exert surprisingly little effect on the sensory qualities of a wine – try it and see – one would be surprised if macerating wine with saffron or coriander or iris root or pepper or wormwood would be anything other than disastrous. That at any rate was what I thought when I started conducting experiments. 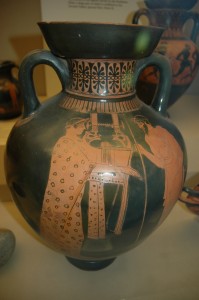 The first thing to say is that it should not be assumed flavours extracted from any given plant when macerated in wine will be the same as the flavour one associates with that plant. Saffron is the most delicate and delicious (not to mention the most expensive) herb in the world, but in wine it’s a dead loss. All the others I mention, however, are good, some extraordinarily so. While I would not necessarily advocate adding it to DRC Burgundy, judicious quantities of Iris root (Orris powder) have an astonishing effect on dry white wines, adding delightful floral notes of roses and violets and hyacinth. Even better is an infusion of vine-flowers, the tiny white inflorescences that, on the two or three days of the year they open, give off a slightly minty, not in the least grapey, scent for the first hour or two in the morning, then smell of nothing. The result in white wine – and also pinot noir, though I’m not sure how it would work with more robust reds – is difficult to over-praise: fresh and intriguing, it elevates otherwise undistinguished wine to heights of which one would never have thought it capable. But – and it’s a big, hairy but – the flowers must be fresh (I tried freezing them once, they gave the wine a revolting vegetable character) and, as with all these adulterants, dosage is critical. As Max Lake said of women’s perfumes: ‘Faint odours are the most interesting. Smells register at very low levels of intensity. Those who ignore this fact have no style.’ 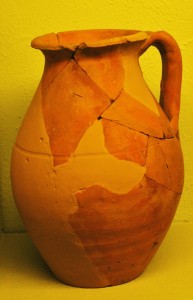 The number of Roman vermouth recipes is very large. I have a long way to go before I will have tried them all, even if I was minded to – the examples of Socrates and Alexander the Great dissuade me from experimenting with hemlock and hellebore, and I have my doubts about mandrake too. As ever, blind tasting, where the subject has no knowledge of what you’ve been up to, is the key, but it has been my experience aniseed, asparagus, basil, coriander, fenugreek, ginger, lavender, wild mint, oregano, parmesan cheese, pepper, rose petals*, rose-water and wormwood** all have a lot to be said for them, provided you abide by the Ne Quid Nimis principle.

In Rome cane-sugar was unknown. The favoured sweetener, for those who could afford it, was honey, but sweet wine or grape syrups made by reducing unfermented grape juice were cheaper and more readily available. There are a number of different types and they figure in about half of extant recipes.

1. Caroenum is must (unfermented grape juice) boiled until reduced by one third (so that – forgive the pedantry but there’s a reason – two thirds remain).

2. Defrutum (which I treat here as synonymous with Sapa) is red must boiled until reduced by half (according to Pliny) or two-thirds (according to Varro and Columella). Sally Grainger, who has made a detailed study of Apician recipes, advises defrutum should be flavoured with figs or quince (specifically 2 L grape juice with 5 dried figs, to be removed after a very slow reduction is complete). Others say forget grape juice and substitute thick date syrup from a health food shop instead. I prefer to use the syrupy grape-juice reduction without additions.

3. Mulsum is wine mixed with (a bucket-load of) honey. Columella is specific: add 4.5 Kg of honey to 13.5 litres of free run unfermented grape juice, seal for one month, strain, seal again and leave in smoke.

Serviceable approximations to Defrutum and Caroenum (to add further to the confusion, the two words are used interchangeably in later Latin texts) can be made by boiling supermarket grape juice. Mulsum can be made by adding honey to white wine. For connoisseurs, we make (vastly superior) versions of these grape syrups using must from our own grapes. Details upon request.

4. Passum is a sweet wine made from raisins soaked in must to rehydrate them and then fermented. Since I only use it for cooking, I find it simpler to open a bottle of Muscat. If, like the Romans, you wish to drink Passum for pleasure as an aperitif, Italian straw wines (Passito) such as Recioto della Valpolicella (red) or Recioto di Soave (white), or Tuscan Vin Santo or the Vinsanto made on the Greek island of Santorini are its modern descendants.

5. Conditum is basically mulled wine, though ingredients (which include pepper, laurel, dates, mastic and saffron) in the Roman versions**** may strike skiers more familiar with the orange, clove and cinnamon recipe for gluhwein as a little eccentric.

6. Posca, mentioned here only for completeness, is sour wine made by adding water to the marc left after wine is pressed. A slaves’ drink, it is the ‘vinegar’ the soldier gave Jesus on the Cross. 50/50 water and red wine vinegar if you’re planning to re-enact The Crucifixion, but you won’t be needing it in any of Apicius’ recipes.

*** Candy is dandy, but liquor is quicker.

****see Apicius I i and ii, or Conditum paradoxum and Conditum melizonum viatorium on celtnet.org.uk

Trying to work out which, if any, modern grapes most resemble ancient varieties like Aminean (from which the celebrated Falernian wine was made) is a hopeless task. There may be a general feeling that grapes growing in, say, Campania, must have some connection with the grapes that grew there in Roman times, but that is about as far as it goes. Until modern grape varieties have their genomes sequenced to establish a family tree from which ancestral relationships can be extrapolated, expert speculation from ampelographers remains just that. Statements, such as that which opens the Wikipedia entry I have just read, that Falernian (a white wine) was produced from (red) Aglianico grapes are rubbish. My best guesses (which quite by chance also happen to be my favourite Italian varieties) for modern equivalents to the four categories of Roman wines are:

Black Wine – Nebbiolo, and perhaps Nero d’Avola. Red Wine – Sangiovese. So far as White and Yellow Wines are concerned, wine-making technique is the principal determinant of final wine colour, but the Campanian grape Greco sounds like it’s been around for a while, and since I like Greco di Tufo, and also Fiano di Avellino, it suits me to elect these to stand in for their ancient cousins. As explained in the preceding section, Passito (red and white) is a good substitute for Passum. 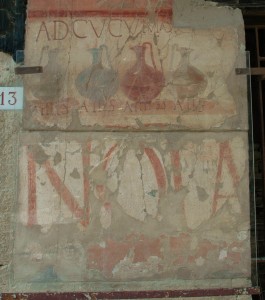 Pinot, which I grow at Mount Terrible, is without question the most interesting grape in the world and also one of the oldest. Grape-growing in Burgundy certainly goes back a long way. We have good evidence for vineyards in Autun (Augustodunum) when the soon-to-be Emperor Constantine was there in 312 AD. The Romans built the city for the Aedui, their first Gallic allies, three hundred years earlier. Vines could well have been put in round about this time, though that is only speculation; there are grapevines carved on second century tombstones from the district. The Gauls, then as now, loved their wine, but until they had the good fortune to be conquered by Julius Caesar they’d been importing it at a cost of one slave per 26 litre amphora*. There are a number of very interesting Roman descriptions of wines made in and around the Burgundy region, though whether or not the Allobrogica grapes described as being grown there were related to Pinot remains an open question. The variety is genetically diverse, which suggests but does not prove it could have been developed from a local population of wild grapes – experiments by Valentin Blattner in Switzerland suggest this can be achieved in less than a generation – rather than being propagated from a small batch of imported cultivars. But this is not an argument I’m qualified to pursue.