For hundreds of years Rome was Mistress of the World. Its ruling elite could afford, and had the means to obtain, anything they wanted – and they wanted the lot. That their cuisine was highly sophisticated and included the widest range of delicacies is unarguable. Sows’ wombs stuffed with lamb’s brains may not sound immediately enticing, I grant you, but most of what they chose to eat must have been reasonably delicious surely. But that proposition is hard to nail down. Almost everything that could have supplied the details we need to bring back their vanished world of luxury and decadence was destroyed in the sack of cities and smoke of burning libraries. 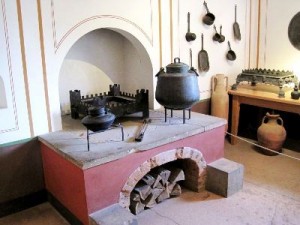 Imagine there aren’t any French restaurants. Everything we know about French cuisine comes from one damaged copy of, say, Michel Guerard’s Cuisine Gourmande, into which someone had stuffed the first dozen pages of the Australian Women’s Weekly French Cooking Made Easy, a selection of Alice B Toklas’s gastronomico-literary anecdotes and a handful of recipes torn from Gourmet Traveller. Imagine further that what we’ve got are not printed pages: rather hand-written versions of the long-lost originals, copied out in exercise-books by a succession of schoolboys with limited English and perfect ignorance of cookery. That, pretty much precisely, is where we’re at with Roman cookery. We rely upon the mutilated manuscript of a text that may or may not have been written by Marcus Gavius Apicius, a first century gourmet who famously ate his way through his 100,000,000 sesterce inheritance, and, upon being told by his accountant he had only 10,0000,000 left, took poison on the grounds that no gentleman of discrimination and taste could exist on so paltry a sum.

Our difficulties don’t stop at too little information. There is this to be said for our world of rampant obesity and supersize serves of Pink Slime fried in chip fat: we have a choice. An absolutely incredible choice unique in the history of the world. Any food, any style, any season of the year, we can buy anything we fancy. By comparison with the food aisle of your local supermarket, the kitchens of the greatest Roman Emperor were hopelessly impoverished. No potatoes, no sugar, no butter, no pasta, no tomatoes, no citrus, no corn, no capsicums, no eggplants, no carrots that you would recognize, very limited rice, no tropical fruits, no chilli, no coffee, no tea, no chocolate. Hard to imagine preparing a modern meal which doesn’t include at least one of these ingredients.

Almost as if they sensed they might be missing out on something, the Romans combed their Empire for new and exciting things to eat. But for us that generates the converse of the problem above: a lot of what they did eat is hard to identify (pastinaca, apium, liquamen), hard to come by (flamingo tongues, whole ostrich, truffle kebabs) or extinct (silphium). Or it may be the idea of eating certain forbidden meats outrages modern sensibilities (dormice, porpoise, peacock), or they are defined as unfit for human consumption (lungs, stomachs, intestines, udders, wombs). Further, because salt and sweetening agents were less readily available then than now, Roman cookery used a salty fish sauce (garum – the best kinds were extremely expensive) and a series of specially prepared grape syrups instead. 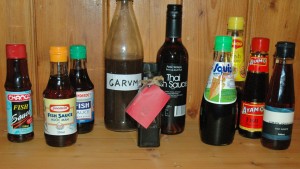 Modern books on the subject encourage would-be Roman Cooks to substitute any old Thai Fish Sauce for Garum, and either sweet white wine or boiled-down supermarket grape-juice for these sweeteners – not an unreasonable thing to do, but I suggest unlikely to recreate the delicate and refined flavours for which Roman gourmets paid so highly. I have ten different kinds of fish sauce in my kitchen cupboard – some thin, some thick, some pale, some dark, some salty and some almost sweet – but to my shame the least approachable and most difficult to use in the kind of cookery with which we are concerned (pax to Lidia Bastianich and Michael White) is the one which advertises itself as the most authentic: the “traditional heir of garum” Colatura di alici from Cetara in Italy.

In summary then: Nobody knows anything. There simply isn’t enough to go on. And to make things even more problematic, very few of the recipes give any indication of quantities. Half a cyathus of garum, or a whole hemina? Your guess is as good as mine. Heigh-ho. Suge Videque*.